Some characteristics of the fishery are:

The national platform is a multisectoral and inter-ministerial dialogue space, in which the actors, with the support of the MPCEIP and through UNDP facilitation, discuss the problems of the Small Pelagic Fishery, in order to improve social and environmental performance. of the fishery.

The general purpose of the platform is to institutionalize the long-term sustainable performance of the small pelagic fish fishery in Ecuador. Their specific objectives, with their respective indicators, are detailed below:

At least the following products will be generated within the platform:

Current status of the fishery in Ecuador. And to determine the root causes of the key problems that limit the economic, social and environmental sustainability of the PPP supply chains in Ecuador.

Detailed description of the steps or actions necessary to reduce or eliminate the causes (identified in the ACR) that are limiting sustainability following the guidelines of the FAO Code of Responsible Fisheries.

The platform consists of three elements that are chained together to build the NAP for the Small Pelagic Fishery and fishery governance system.

Guide the platform, making practical decisions about the process and making decisions based on the contributions of the participants.

It is the maximum expression of the platform where all invited actors participate to report on the progress of the NAP. The space can generate inputs for the construction of the NAP.

They are multidisciplinary teams of 10 to30 people that support the construction of the NAP by the development and recommendation of actions to the problems that affect the fishery.

The key actors who will participate in the platform come from four main groups.

What is a sustainable fishery platform for small pelagic fish and what is their main objective?
The national platform is a multisectorial and inter-ministerial dialogue space, in which the actors, with the support of the MPCEIP and through UNDP facilitation, discuss the problems of the Small Pelagic Fishery, in order to improve social and environmental performance. of the fishery. This space represents an opportunity for all the actors in the supply chain to be part of the definition of improvements to the fishery, generation of policies, among other elements of fisheries management.

The general purpose of the platform is to institutionalize the long-term sustainable performance of the small pelagic fish fishery in Ecuador. With an initial milestone that is the construction of the NAP - Small Pelagic Fishery and as soon as its implementation and governance of the fishery.
Who can participate in the Small Pelagic Fishery platform?
All the actors related to the supply chain that wish to be part of the generation of solutions for the fishery can participate. These actors can be public, private, civil society and development partners. It is preferable that the participants have the support of a group of actors, such as leaders of associations of purse seine vessels, representatives of the industry, representative of public institutions, among others. The important thing is that the participants have the capacity to commit themselves to the implementation of the proposed changes to improve the sustainability of the Small Pelagic Fishery.
What are the main products of the sustainable Small Pelagic Fishery platform?
The objective of the Small Pelagic Fishery platform is to become a participatory fishery governance system that lasts over time and participates in the definition of fishery management measures. However, there is a minimum of products that the platform must develop: - An analysis of the root cause of the sector that presents a diagnosis, identification of problems and causes and approach of solutions. - A NAP- Small Pelagic Fishery where a series of measures, actions and mechanisms to improve the sustainability of the fishery are established within 5 years. - Governance of the fishery: establish a long-term participatory management scheme for the fishery, where management measures are recommended year after year based on scientific information to help ensure the sustainability of resources.
What dialogue spaces exist on the platform, what is its function and frequency?

What commercial species make up the small pelagic fish fishery and what is its importance in the country?
Off the Ecuadorian coast, the Pacific Ocean is characterized by representing a transition zone between the tropical and subtropical regimes that generates favorable conditions for the development of the small pelagic fishery, forming large concentrations of commercial interest for the coastal seiner fleet, whose activity is one of the most important economic and social in the small sector (González et al., 2008). It is estimated that the sector generates about 24,000 sources of direct employment and is second in terms of catch after tuna.

The main exploitation species are:
What is the fishing net art of Cerco de Jareta used by the Small Pelagic Fishery fleet?
According to González et al. (2008), this network is used to capture fish whose habitat is located in the surface layers of the sea (up to 128 meters deep), concentrated in compact schools. Its operation is based on the location of a shoal, after which the launching of the net is made, a maneuver that borders the shoal forming a circle, when the haul is finished, the seine line is pulled closing the bottom of the net, the catch is concentrated on the section of the headboard whose selectivity (size of the fish) is given by the stretched mesh eye size.

The Coastal Fisheries Initiative in Latin America (CFI) project is executed in Ecuador and Peru. The CFI aims to demonstrate holistic ecosystem-based management and improve the management of coastal fisheries in the Southeast Pacific, implementing three components: improving fisheries governance; the support to the authorities for coastal marine space planning; and the exchange of experiences, documentation and dissemination of lessons learned to strengthen the synergies between fisheries and their actors at the regional and international levels.

The initiative is carried out by the governments of Ecuador and Peru with the technical cooperation of the United Nations Development Program (UNDP) as the implementing agency of the Global Environment Facility (GEF). In addition, for the execution of the activities in Ecuador, it has the support of WWF and Conservation International (CI) Ecuador as project partners. 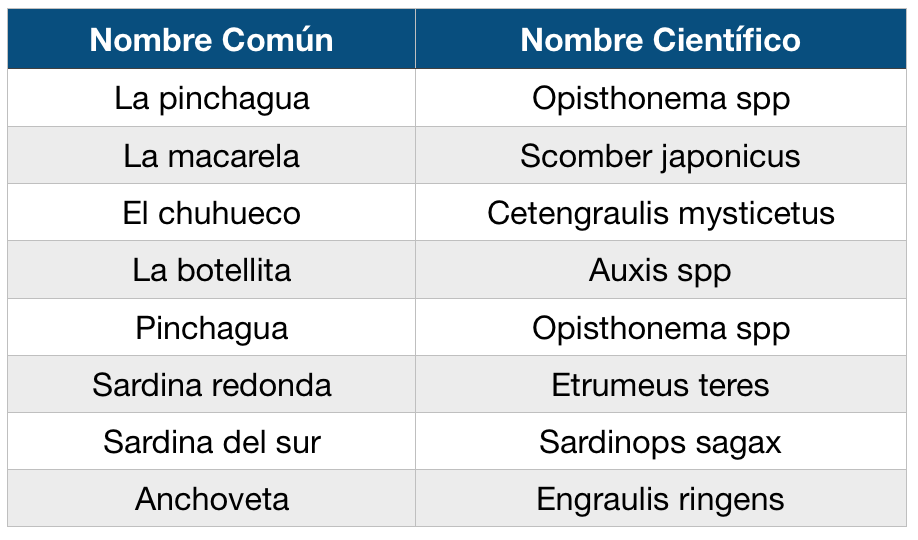